Create an Account - Increase your productivity, customize your experience, and engage in information you care about.

Alexander Faribault
Alexander Faribault, an early fur-trader and entrepreneur, founded the town site in 1852 to take advantage of its scenic qualities, abundant resources, and strategic location. In the 1860's, Faribault gained national recognition as an educational and religious center due in large measure to the efforts of Bishop Henry Whipple in developing a system of interrelated churches and schools. This, along with the establishment of the highly acclaimed State Academies for the Blind and Deaf, led Faribault to be known as "Athens of the West." 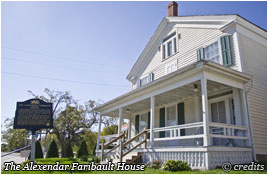 As the community flourished, a number of homes, churches, and public buildings were constructed with outstanding architectural design features. As a result, Faribault is blessed to contain more than 40 individual properties that are listed on the National Register of Historic Places.

The 50th Anniversary of that adoption was celebrated in Wuerzburg on April 28, 1999. The 19 Faribault residents who attended the celebration returned with deep admiration of Wuerzburg, its citizens, and the renewed friendship between the 2 cities. The Faribault delegation also found a new source of pride in their hometown.
Meeting Documents
Tell the City
Permits & License
Library
Parks & Recreation
Online Payments
Employment
Visit Faribault
Journey to 2040
Economic Development
Citizen Alert Program
Police Department
Next Previous